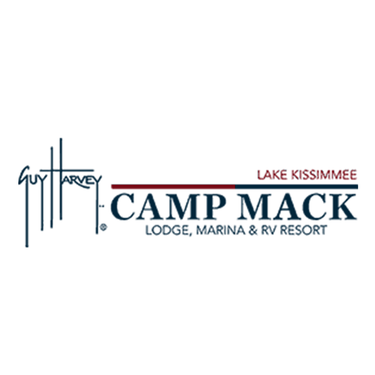 Camp Mack, a Guy Harvey Lodge, Marina & RV Resort is your escape to the Great Outdoors and to enjoy our Old Florida Charm. We are located just outside of Orlando on the Kissimmee Chain of Lakes with over 35,000 acres of water to explore, which is great for fishing and exploring the Florida wildlife. Guest can either stay at the lodge, cabin, or RV sites and enjoy our amenities like our marina, boat rentals, Outfitter Store, pool, kid zone, and more! As you explore Camp Mack you experience our charm from starting as a fish camp over 100 years ago! HISTORY Camp Mack, a Guy Harvey Lodge, Marina & RV Resort has been a ‘fish camp’ for well over 100 years and on a geological map from 1836, where the area of the camp was described as Tyson’s Camp. The camp occupies a high bluff along an oxbow of the Kissimmee River at the eastern edge of Polk County. A pair of wealthy executives with the Coca-Cola Company – Leon Grady (L.G) Bruce and the man known as “Mr. Mack”— acquired the land in the early 20th century and created a retreat for company employees from Tampa. L.G’s wife Josie Bruce worked in the general store for many years. Leon Denton and the Denton family (wife Gladys and sons Jackie and Ronnie) of Lake Wales acquired the property in the 1940s and operated it as a fishing camp until 1983. Leon Denton and his family hosted many individuals over the years including Billy Graham, Cowboy Luttrell, Jack Dempsey, Gen. James A. Van Fleet, Bob Woodruff, Ray Graves, Charley Pell, and Ben Hill Griffin, Jr. The airboat company, Alligator Cove Airboat Nature Tours, owned by Andy Denton, the son of Jackie, is headquartered at Camp Mack, a Guy Harvey Lodge, Marina & RV Resort. Lake Kissimmee State Park, located across from the Camp Mack, a Guy Harvey Lodge, Marina & RV Resort, during the Civil War the area was used for raising cattle that were shipped to the Confederate Army during the Civil War or traded with Cuba for supplies. After the war, cattle became the main industry, and this continues to the present day. In 1969, the state of Florida purchased 5,030 acres of land from the William Zipperer for use as a state park. Lake Kissimmee State Park was opened to the public in August 1977 and an additional 900 acres was purchased in 1997 and added to the park’s western boundary. Today you can see Florida’s cowboy heritage comes alive with living history demonstrations of the early Florida “cow hunters” in an 1876-era cow camp at the Park. Today, we have been featured on television shows related to fishing including on ESPN during the 2005 Bass masters Citgo Southern Open and on Sweetwater Fishing TV. The Bellamy Brothers filmed their Catahoula music video at Camp Mack, a Guy Harvey Lodge, Marina & RV Resort, and on Lake Kissimmee in 1997. The Lighthouse movie starring Danny Glover, directed by Martin Glover was filmed in 2012 as well as at other spots in Central Florida including Ponce Inlet. People visit for its world-class fishing and to escape to the Great Outdoors.